MTS – Multinlingua Translation Service – interpreting and translation bureau for all languages and dialects throughout the world with headquarters in Trier, was established in 2000.

The MTS translation bureau is one of the largest providers of translation services in Trier, Luxembourg and vicinity. Since its establishment in 2000, MTS has been working intensively and successfully with numerous customers at home and overseas. Our customers include companies, banks, lawyers, notaries, official authorities, courts, ministries, institutions, hospitals, educational authorities and private customers from Germany and abroad.

The owner and managing director, Mr. Christopher Becker is an authorized interpreter and translator for the Armenian and Russian languages. He is also a member of the Bundesverband der Dolmetscher und Übersetzer e.V. (Federal Association of Interpreters and Translators) and in addition to his linguistic/pedagogic university studies, he also has state-approved commercial qualifications.
The MTS translation bureau is located in the Roman town of Trier, the oldest town in Germany, close to the border with Luxembourg, Belgium und France.

Thanks to its location in the centre of the University town of Trier, directly opposite the Treveris Mall and in close vicinity to the main market, we are easy to reach by both car and bus. Numerous parking facilities are available. 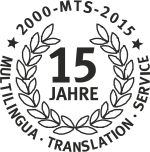